We extract the value of the electroweak S parameter from lattice gauge theory, using domain wall fermions to maintain good chiral and flavor symmetries on the lattice. Our initial results comparing SU(3) gauge theories with two and six flavors of fermions in the fundamental representation have been published in Physical Review Letters (PRL 106:231601, 2011, arXiv:1009.5967), and additional details of our calculation were presented at the Lattice 2011 conference (PoS Lattice 2011:087, arXiv:1111.4993). 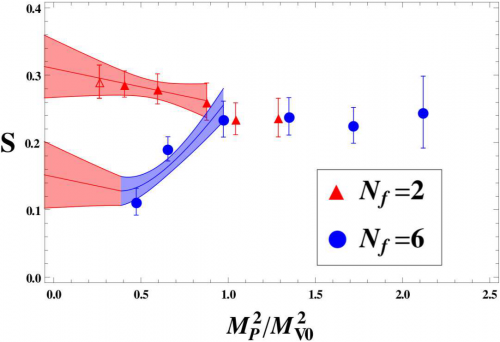 The experimental value of S is small and negative, S ≈ -0.15 ± 0.10, making dynamical reduction of the S parameter is crucial to the phenomenological viability of “technicolor” models of electroweak symmetry breaking through new strong dynamics. Such a reduction in S is expected to result from parity doubling between vector and axial-vector spectra as the number of flavors increases towards the onset of IR conformality.

Our focus in 2012 is exploring the importance of finite-volume effects in the two- and six-flavor results presented above, by carrying out corresponding calculations using smaller lattice volumes. We are also adding new large-volume two- and six-flavor data points in the region of masses where the six-flavor S parameter differs from the two-flavor result. Finally, although we are exploring these vector and axial-vector observables in the ten-flavor theory currently being studied by the LSD Collaboration, it is not yet clear whether or not that system is IR-conformal. IR-conformal theories possess neither chiral symmetry breaking nor a well-defined S parameter, though the analogous quantity may still be of theoretical interest.