Simulations to determine the critical values of the bare quark mass and the clover coefficient, necessary to simulate at zero quark mass and with reduced lattice artifacts, are underway.

As a starting point to test our methods, we attempted to reproduce an old tuning result obtained in quenched QCD by Luscher et al. Tuning at a particular value of beta, here taken to be 6.4, is accomplished first by sampling over a range of values for the fermion mass and clover coefficient. The bare mass is tuned to give a near-zero renormalized fermion mass, and then the clover coefficient is adjust until the order-a effects are observed to vanish. 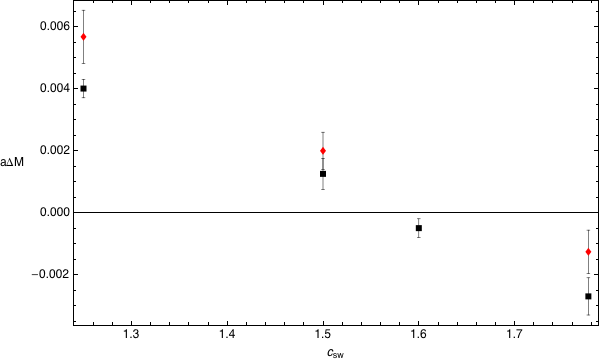 Here we plot the clover coefficient c_sw (horizontal axis) versus the size of the O(a) artifact, here parameterized by the PCAC mass difference (vertical axis). (If the technical details aren’t clear here, please see the whitepaper on non-perturbative tuning.) Black points are the prior results of Luscher et al, red points are newly obtained using Chroma. Agreement is good at the three points measured, with the difference explained by relatively low statistics - this simple test was run on a workstation.

Exploration of the 10-flavor parameter space in terms of the clover coefficient and bare mass is underway currently. Results so far are inconsistent; investigation of the time series for the various currents being measured (again, see the whitepaper for technical detail) reveals that the simulations have sometimes failed to thermalize over the 500 trajectories collected - see the figure below for an example. Extended runs are now in progress. 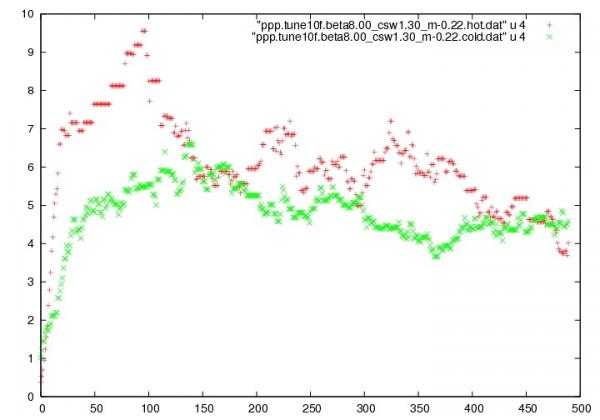 Performing an SF running coupling measurement presents several challenges compared to a typical lattice simulation. Extremely long autocorrelation times in the observable require the collection of tens of thousands of gauge configurations in order to obtain an accurate statistical estimate.

Due to the above considerations, performing an SF running coupling measurement involves the collection of a very large amount of data, typically split over many files (to date, our 8-flavor simulations have resulted in the creation of over 70,000 distinct checkpoint files, each containing 1,000 measurements.) Having efficient scripts and methods for the collection, manipulation and analysis of this data is critical.

One of the cornerstones of the 8- and 12-flavor project was the development of such analysis and control programs, which have been refined numerous times over the course of many months. These scripts can all be directly applied to the 10-flavor case, and will allow efficient and quick completion of the production runs and extraction of the relevant data, as soon as the preliminary coding and tuning are completed.